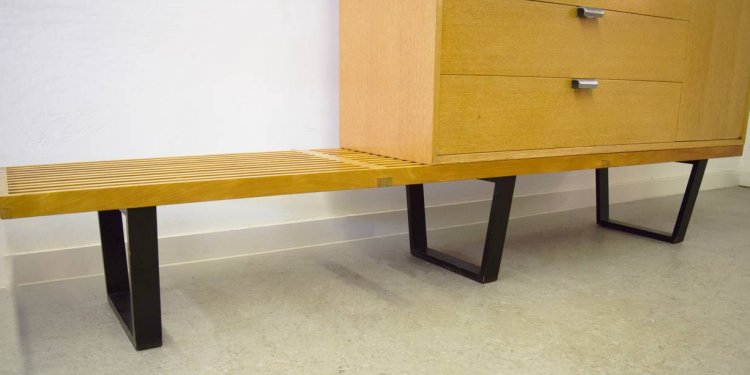 
There is no evidence that furniture specifically designed for writing existed in classical antiquity, and it seems that scribes held their writing materials in their laps or on low stools. It is during the Middle Ages that illustrations of furniture for reading and writing begin to appear in the West. During that time, before the advent of movable type, every reader was potentially a writer because books had to be written or copied by hand, and desks included hooks and slots for writing materials and bookmarks.

Most writing was done by scribes working for the more powerful within the church or without. Concern for the scribe’s comfort was slight, and “deskes” were at first simple boxes with hinged, sloping lids for writing and space inside for tools and materials. These were small enough to be carried – no more than three feet wide – and would be placed on a table or bench when in use.

During the fifteenth and sixteenth centuries, as joinery became more precise, interior drawers were added, often divided into three sections for ink pot, blotter and powder tray. By the seventeenth century, the “deske” began to be coupled with its own stand, at first removable and later made a single piece with the sloping box, a form now known as the clerk’s desk. When drawers replaced the stand, the piece was known as a bureau or Bureaux table. When the slant top was hinged at the bottom and supported on pullout brackets or “sliders, ” the piece was called a slant-front desk. At the same time, oak fell from favor to be replaced with walnut or, for less formal pieces, painted pine.

The secretary desk, when it first appeared in the seventeenth century, must have seemed to be a concoction of unrelated parts – a commode topped with a “deske” topped with a library – and in fact, the secretary was originally made in three parts. Before long, the more common configuration was a slant-front bureau with an enclosed bookshelf – the library – placed on top. When the pieces were assembled, the secretary would appear to be a single piece of furniture.

By the eighteenth century, a variation appeared that was designed to be used while standing, generally by a higher-ranking servant in the household. The butler’s desk was distinctive in that the work surface, when closed, was vertical rather than sloping. This allowed for a shallower piece that could be positioned in a hallway or smaller room. In both the secretary desk and the butler’s desk, the hinged writing surface does double duty as a lockable cover to protect the papers and supplies within.

In Sweden, outside of the royal palaces and the grand houses of the nobility, interior space was at a premium, especially in the winter. While an entire house would be occupied in the warmer months, the entire family would live, work, eat and sleep together in the kitchen when the nights grew long and cold. It made sense for Swedish furniture to be designed to serve multiple purposes, and the secretary was no exception. As a place of safe storage, the desk would often have hidden compartments and notched shelves to hold the valuable family silver. As a status symbol, the imposing desk and bookcase excelled – even more so when a clock could be built in. For smaller rooms, the upper part of the clock case could rise from a slant-front or fall front desk. These pieces would be built of Scandinavian pine and given a painted finish. 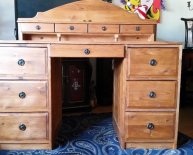 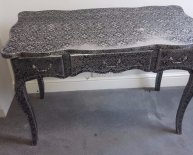 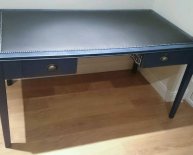