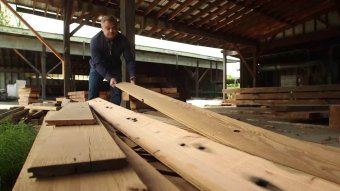 Patrick LaMear looks like a kid in a candy store as he walks the grounds of an old mill in Tacoma, Washington - a facility that once built components for World War I ships.

To the untrained eye, it looks like a giant wooden shed that lost its purpose long ago. To LaMear, owner of Urban Reclamations - a shop that makes furniture from reclaimed wood - it's a treasure chest. He points at a beam holding up the roof and his face lights up.

"It's got a lot of color on it, various nail stains- this is really a cool piece!"

It's his job to find beauty in the rough. LaMear regularly scouts out timber from old barns, factories and mills. It's a skill that he's been honing for years.

"I've been around this ever since I was a kid, " says LaMear.

"Once you open the beam up - really you never know. It's kind of a surprise what's really inside."

LaMear opened his business six years ago in a 1920's Seattle building keeping with his desire to re-use old things. His store is a showroom in the front and a workshop in the back where customers can watch craftsmen make furniture. His nine employees saw and sand LaMear's finds by hand. They lay out the wood in a "mosaic" to figure out what timbers go best together. 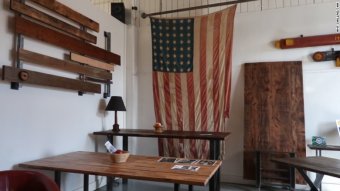 About 80 percent of the furniture, mostly tables and chairs, ends up in Seattle restaurants, bars and hip offices. Others are custom pieces for the growing crop of Seattle urbanites who appreciate old wood.

"Seattle is going through a growth renaissance - a lot of condos, apartment, odd sized rooms, " says LaMear - all of which need to be furnished.

About 20 percent of his furniture is purchased online and shipped to customers around the country. LaMear says demand for reclaimed wood has only been growing since he started.

"I think that people appreciate that they're keeping (wood) out of the landfill. But I don't think that's the driving factor. I think it's really the quality and what the product exudes over something manufactured, " says LaMear.

"I like nail stain - that dark, black stain that comes out of the nail being in the wood for a hundred years. That's something you can't really replicate, " says LaMear.

The company offers eight different styles of table bases made of steel.

"The steel we use is actually thicker than it needs to be and the table tops are almost 2 inches thick. It's old growth so it's denser."

"When you're at a winery and you take a crystal glass and you set it on a rock- all that density comes up through the glass. I want the table to exude the same solidness, " says LaMear.

New wood has no "soul"

LaMear says new wood just doesn't have the same character or "soul". He says the wood he reclaims is sometimes from 800-year-old trees and has had many lives since being cut down.

"It wasn't just a tree that was cut down and tossed into a lumber yard. It served a purpose. It held up a building, it was a family farm, it was maybe a gate that animals went in and out of for a hundred years. Maybe it was a building that provided jobs, " LaMear says.

"Having somebody walk on a step for 100 years and getting worn with boots- has a beauty and a texture to it that you can't replicate." 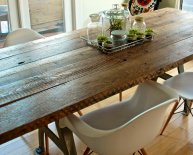 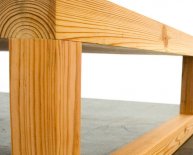 What is Reclaimed wood furniture? 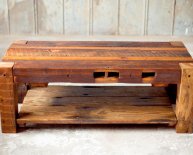